Along the Belt and Road: Xinjiang’s thriving international trade and cultural exchanges The Xinjiang International Grand Bazaar is the largest bazaar in the world by scale, combining Islamic culture, architecture, ethnic commerce, tourism and entertainment. It is also one of the most famous landmarks in Urumqi.

It would have been hard to find many regions in the 13th century more prosperous and cosmopolitan than Xinjiang, a pivotal hub along the ancient Silk Road. When Italian traveler Marco Polo first visited Xinjiang, he was spellbound by its fusion of thriving international trade and vibrant culture, while a plethora of different ethnicities forged connections between China and the rest of the world. It was the high point in Xinjiang’s history, and a golden age of cosmopolitan culture.

Centuries later, the ancient Silk Road has been reinvigorated and transformed into the new “Belt and Road Initiative” (BRI), injecting new charisma into Xinjiang’s dust-laden glories. It is now one of the most important international commercial hubs in Northwest China, with some 6,090 freight trains heading to Europe and Central Asia in the first half of 2021, carrying 6.57 million tons of merchandise. It is also a rising cultural exchange center, attracting foreign talents and students. 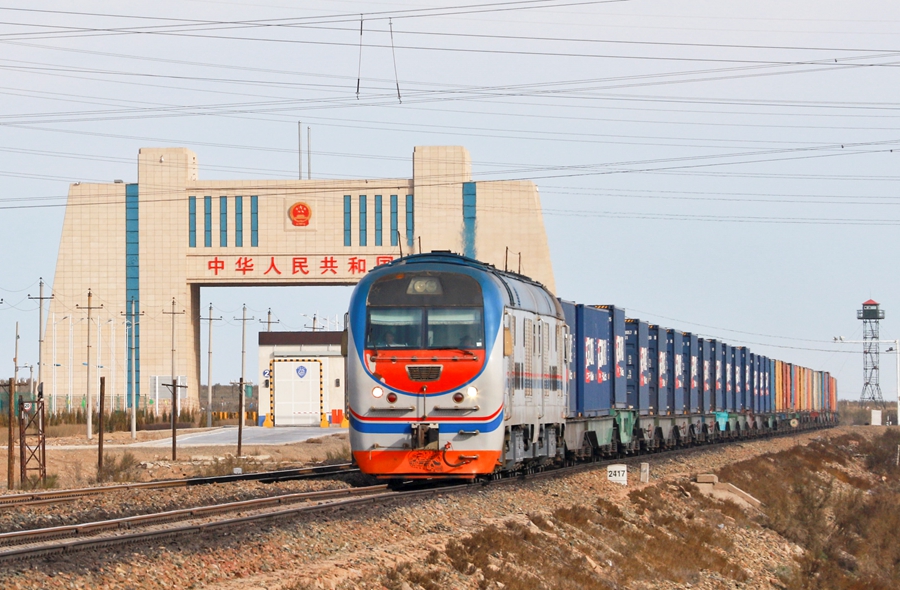 Carrying over 1,720 tons of ketchup, a fully-loaded freight train bound for Rome left the Urumqi International Land Port Area (UILPA) on April 4th. The ketchup, which is produced in Xinjiang and worth 1.48 million US dollars, will then be processed into pasta sauce and salsa in Italy.

Accounting for a quarter of all global tomato output, China is a leading exporter of tomato and tomato-based products. Xinjiang produces over 70 percent of China’s tomatoes, but its exports used to be hindered by the lack of a convenient international transportation network.

Traditionally, Xinjiang’s ketchup was first sent to Tianjin sea port and then dispatched to Europe. The costs were high and it took at least a month to reach Europe by sea.

Thanks to a growing network of China-Europe cargo trains, more than 80 percent of ketchup produced in Xinjiang is exported to Russia and Italy every year. It now takes only half a month for Xinjiang’s ketchup to reach Europe. UILPA has launched several new routes, dispatching hundreds of freight trains carrying Xinjiang specialities, including pears from Korla and walnuts from Hotan, to Europe and Central Asia, expanding the international market for local farmers.

As of May 2021, there are 21 China-Europe freight train lines in UILPA bound for 19 countries and 26 cities in Central Asia and Europe. More than 200 types of goods from daily provisions and clothing to machinery and building materials are on the list.

“When the freight route was first established, its main function was to bring Xinjiang’s products to the European market. After years of development, many European and Central Asian companies have also used our freight service to promote their products in China, creating a win-win solution for both sides,” said Liu Le, vice manager of UILPA. 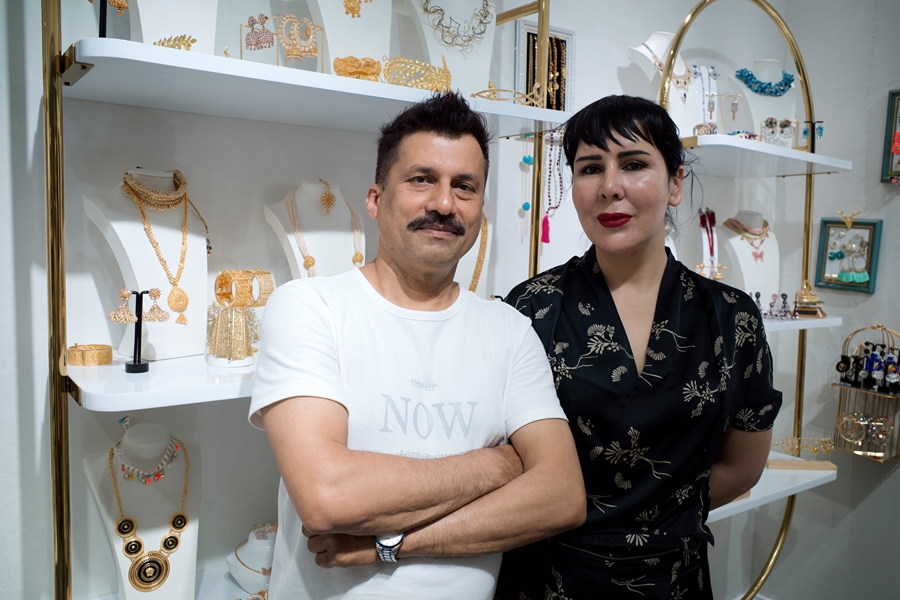 Xinjiang’s booming international trade is not only about “going out”, it also attracts overseas merchants to start their business here. Working in his jewellery shop at Xinjiang International Grand Bazaar, Urumqi, 50-year-old Asim Mohammad speaks fluent Mandarin and Uyghur with his clients. His shop is a treasure trove filled with Uyghur and Pakistani style jewellery designed by his wife, a Uyghur artist, while the warm ambiance and enormous influx of customers shows the allure of this shop.

“I came to China by bus in 1993. Transportation between China and Pakistan was quite inconvenient at that time. It took me days to go to Urumqi. In 1995, I met my wife and we started our jewellery business, and I have stayed in Xinjiang ever since,” said Mohammad.

According to Mohammad, doing business in Xinjiang is both lucrative and convenient. Pakistani and Indian style jewellery are popular with local Uyghur clients, while local authorities and business organisations have provided him the help he needs, such as visa services and favourable tax policies.

“I think BRI is a brilliant idea. It has helped many foreigners start businesses in China, and also brought Chinese products to their countries. I have many Pakistani friends who are now working in Xinjiang, and we are happy doing business here,” said Mohammad.

Under the framework of BRI, international trade has been a lucrative source of income for Xinjiang. According to statistics, in May alone, Xinjiang’s total import and export value hit 12.54 billion yuan (about 1.94 billion U.S. dollars), representing 48.3 percent year-on-year growth.

“Before the pandemic, my shop saw 200 customers per day, earning me 4,000 yuan. Life here in Xinjiang is very cozy and prosperous. I feel really content with my life,” said Mohammad. Pacing to and fro in his dormitory in Shihezi, 21-year-old Adil Raza tries to memorise all his clinical medicine notes. When the new semester starts in two weeks, he will become a sophomore at the medical school of Shihezi University.

“I was born into a family of doctors in India. Both my elder brother and I have studied medicine at Shihezi University. The teaching quality here is superb, and the tuition fees are affordable,” said Raza.

Raza is one of the 409 foreign students at Shihezi University. In recent years, more and more foreign students have chosen to study in universities in Xinjiang. According to China’s Ministry of Education, over 500,000 foreign students studied in China in 2020, compared to 1,200 in 1978. “Studying in Xinjiang has made me realise how beautiful this place is. I love to talk to my Chinese friends and share Indian culture with them. And I really love Xinjiang cuisine, especially the spicy chicken stew,” said Raza.

Raza’s professor, 53-year-old Azeem Inayad, is a Pakistani expert in human physiology who has been working in Shihezi University for 12 years. His son was only two years old when they moved to Xinjiang in 2002, and now the boy is a college student majoring in physiology like his father.

“I came to Xinjiang in 2002, and was spellbound by the friendly people and good working environment here. I gave up my permanent teaching position in Pakistan, hoping to start a career here in Shihezi,” said Inayad.

Inayad says his students are from different countries. In addition to teaching them medical knowledge, he also likes to hear their stories and opinions of China. 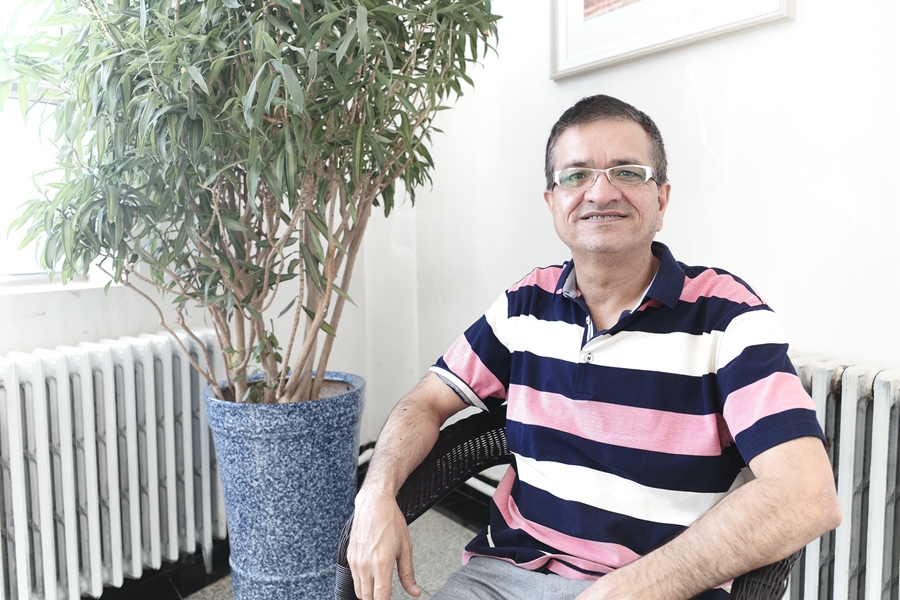 “Many of my students who are now back in their own countries send me messages saying they miss Xinjiang and their friends here. The BRI is not only about trade, it is also about people-to-people exchange. Those students can build a bridge between China and their countries, which is wonderful,” said Inayad.

“I hope more students can come and study in Xinjiang. They should see Xinjiang with their own eyes, not just blurry and biased images from the media,” added Inayad.

“I always tell my friends back in India that Xinjiang is a beautiful place. Cultural exchange and communication is really important, and I hope I can introduce Xinjiang and China to my people in India,” said Raza.